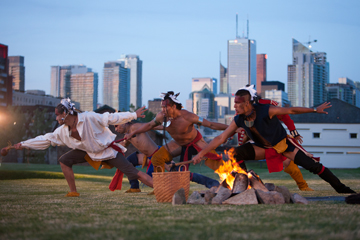 The performances evoked the personal and collective indigenous experience in a space and place where some of that history occurred.

The festival presented three world premieres:
- The Honouring, an evocative multi-disciplinary work from award-winning choreographer Santee Smith's Kaha:wi Dance Theatre
- The Road, an original play from the Centre for Indigenous Theatre
- Corps de Voyageur - Soldiers in Capote, a play from an original script from Métis historian and filmmaker Virginia Barter with original music composed and performed by the Métis Fiddler Quartet.

All of the Indigenous Arts Festival @ Fort York events were part of the City's War of 1812 Bicentennial Commemoration program. Fort York is located at 250 Fort York Blvd. and is one of 10 historic museums operated by the City of Toronto.

This festival was presented by the City of Toronto with support from the Government of Canada, the Department of Canadian Heritage, the Province of Ontario and Tim Hortons.