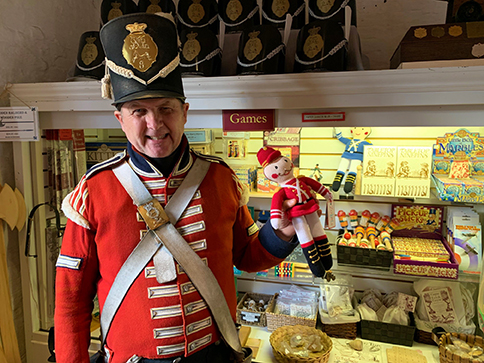 David Juliusson, one of Fort York’s longest serving staff, retired in December 2020. A dedicated member of the Joint Health and Safety Committee, David served as a Museum Program Officer for 29 years and his tours were a perennial favourite of school groups.

He’s seen here in the uniform of the 8th Regiment of Foot – which served at Fort York during the War of 1812 – inside the fort’s shop among its outstanding selection of no-battery-needed toys for small children.

Wayne joined what was then called City of Toronto Museums in 2009, providing leadership for the Collections and Conservation unit, responsible for managing Toronto’s 1.3-million-item artifact collection. He had previously led policy and research projects for Toronto Parks, Forestry 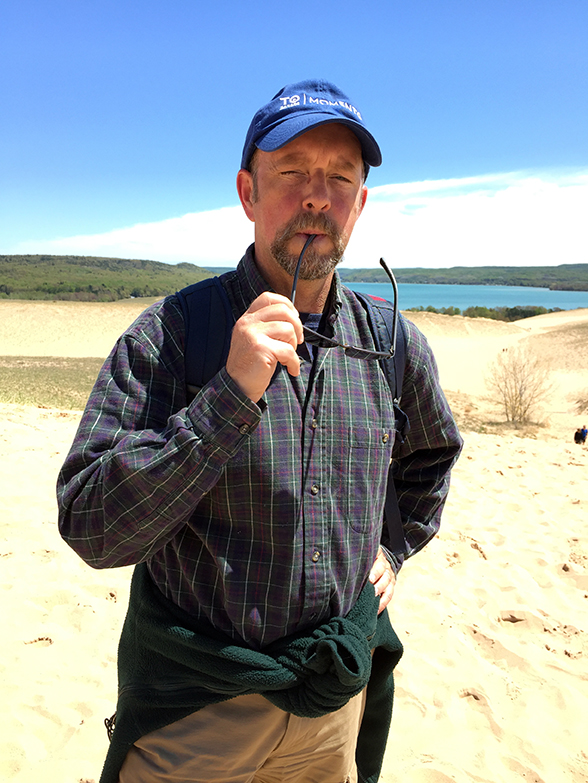 Wayne Reeves, who retired on February 25, is seen here thinking hard at the Sleeping Bear Dunes National Lakeshore in Michigan on May 20, 2018. Photo courtesy Julia York and Recreation as a historical geographer. His specialty was the history of Toronto’s waterfront – contributing substantially to master plans for parks and development along Toronto’s ever-evolving shoreline.

He has written widely for scholarly and public readerships on topics relating to the history of Toronto. These include water infrastructure (including sewers and waste disposal – see “Burying and burning trash on Toronto’s Military Reserve” in the F&D, March 2015), brewing and, most recently, Packaged Toronto: a Collection of the City’s Historic Design, together with Spacing’s Matt Blackett and Alexandra Avdichuk, the City’s Supervisor of Collections and Conservation.

Wayne was hired just as planning for the City’s War of 1812 Bicentennial commemoration was getting underway. He directed the research and exhibit program for the bicentennial and was deeply involved in the design of exhibits unveiled in the Fort York Visitor Centre in September 2016. The building and the exhibits were never meant to dominate the National Historic Site but rather, as Brian Leigh Dunnigan writes in his review (F&D, December 2016), serve to introduce the site and the conflict at the heart of the story of the fort.

Together with David O’Hara, manager of Fort York, and his staff, and a great many other people, Wayne and his staff rose to the challenge of designing, costing and ultimately opening the Visitor Centre, one of Toronto’s great attractions, and internationally recognized for its architecture as well as its exhibits. Wayne wrote about his vision for the Vault (in the F&D, October 2010), a special room inside the Visitor Centre built to highlight prized artifacts with unique stories in the City’s collections. He then oversaw a joint effort by the Canadian Conservation Institute and the City to restore and exhibit the colours of the 3rd York Militia in the Vault (F&D, June 2013).

Together with War of 1812 Bicentennial Historian Richard Gerrard, Wayne curated Finding the Fallen: The Battle of York Remembered, which opened in the Market Gallery in 2012 (and is still on display in Fort York’s Brick Magazine) and included a book of remembrance with names of all participants in the conflict. So many commemorative events, talks, concerts, walks and exhibits during that and the following year put the fort under a favourable spotlight, setting the stage for the opening of the Visitor Centre building.

The 1812 commemoration was followed closely by that of 1914 – the commemoration of the Great War, which occupied Fort York with another intricate set of exhibits, events and programs involving public participation. These were, again, curated by Wayne and special projects coordinator Sandra Shaul. The Great War – in your Attic, Closet or Storage Locker was just one of many. The First World War touched many families in Toronto, as well as many who came here after the war, and this commemoration was deeply felt.

Wayne’s collegial nature served the interests of the fort and the community at large. He and Jane French from his staff worked closely with the Mississauga of the (then New) Credit First Nation on the exhibit Outcome of the War of 1812: First Nations Betrayed, which opened in their new community centre near Hagersville. He worked with the late Steve Otto and Michael Peters of The Friends, and the late Chris Baker, exhibition coordinator for Toronto Culture, to mount At Ease: The Military at Play in Nineteenth-Century Canada in the Blue Barracks. He generously gave his time and expertise, contributing articles and book reviews to The Fife and Drum.

He has also worked closely with fort staff and volunteers at The Friends and the Fort York Foundation in acquiring and exhibiting historic items of special affinity to the history of the fort and Toronto. These include the Cawthra family heirlooms, Upper Canada Preserved medals and Chewett’s War of 1812 regimental order book. He worked collaboratively with fort staff on two layers of interpretive panels – one inside the fort walls, the other installed as wayfinding posts across the National Historic Site, bringing an unprecedented depth and visibility to the historic interpretation of the site for visitors. These panels, beautifully designed and fabricated, have held up well over the course of a decade now.

Wayne, still a young man, and with a depth of experience, has much more to contribute. He and his wife Julia are accredited judges of craft beer and have planted heirloom varieties of apples from which they make cider. We wish him well in his future
endeavours. Exploring and writing about the history of our city we’re sure are among them.

Dr. Andrew Stewart is an award-winning archaeologist, an expert digital map-maker, and the Chair of the Fort York Foundation.

Fort York site co-ordinator Richard Haynes retired in January after just over 30 years among the barracks and blockhouses of Toronto’s founding landscape. “I owe the fort (and the City) everything,” he tells the F&D, “for providing me with a great life, career and some wonderful memories.” He made a difference to the place in all kinds of ways. “His smile, wry wit and ability to call things as he saw them,” says Kevin Hebib, “always helped his colleagues.”

Richard was born in Oxford, went to school in Winchester and earned his first history degree from the University College of Swansea, South Wales, in 1986. At the optimistic age of 21, he set out for Windsor, Ontario, to earn his MA. Laurie Leclair married the young scholar two years later and they sought their fortune in Toronto, where Richard was hired as an historical interpreter in August 1989.

“The fort has always been busy, sometimes crazy, but never dull,” he says, “and I’ve been lucky to work with some wonderful people over the years.” It’s hard not to regard those early days (before responsibilities grew) as the best ever, “when it was so much fun” just to come to work. There was satisfaction as well, “despite all the problems and challenges that went with the job.”

Although many celebrities, including royalty, passed through the national historic site while he was there, Richard considers the highlight of his career to have been the 200th anniversary of the Battle of York, held on the sunny weekend of April 27, 2013. Among the many events planned by the City, the Canadian Army and Fort York was Walking in Their Footsteps, the Richard as a private in the 8th (King’s) Regiment, defending muddy York.

This image appeared on posters all over the city during the Bicentennial of the battle in the spring of 2013. Courtesy 32 Canadian Brigade Group walking tour that began at dawn where the Americans landed and traced the course of the fighting back to the fort. “I will never forget looking back and seeing 700 people following me on that tour,” he marvels. “It was special and will never be repeated.”

Richard himself, of course, will never be repeated. “I have always been in awe of his steadfastness and compassion,” adds Hebib who, as a program officer at the fort, has known the man for decades. “Richard is a disciplined and measured man” who brought to his work “the thoughtfulness and focus he developed as an accomplished martial artist.”

David O’Hara also worked with Richard for most of his 15 years at the fort, a period that included management of the Invictus Games, development of the Indigenous Arts Festival and the completion of the Visitor Centre. “It was a pleasure working with Richard,” he says, “to see so many initiatives through to completion.”

In early March the Friends of Fort York (through the generosity of its chair) held a very English dinner for Richard at an old pub in the centre of the city. Conforming to the style of its subject, there were no formal speeches. The name of the place – The Queen & Beaver – might be taken as symbolic of Richard’s own career. And as a summary of those 30 years (as if we were writing the man’s obituary!) we have the words of another long-standing colleague: “There never was a kinder man.”

The new Manager of Fort York National Historic Site is Kaitlin Wainwright, formerly the Director of Programming at Heritage Toronto. The appointment was announced December 17 by Cheryl Blackman, Director of Museums & Heritage Services for the City.

Kaitlin first joined Heritage Toronto in 2012, where she managed the historical plaques project before becoming Director of Programming in 2014. As such, she’s had a lot to do with the agency’s new digital education projects and its Emerging Historians program. Heritage Toronto is an arms-length charitable agency that promotes and interprets the urban heritage of the city.

“The focus of her career as a public historian and cultural administrator,” said Blackman, “has been working with people to build connections between the past, present, and future, and to promote heritage as a public good.”

Kaitlin is also an avid cyclist and swimmer who knows Toronto’s waterfront well. Her position at Fort York is, strictly speaking, only interim – in the rolls of the Toronto Public Service, David O’Hara is merely “on leave” at Parks, Forestry & Recreation. We wish them both well and look forward to working closely with Kaitlin to help her advance the profile and innovative programming of Fort York National Historic Site.