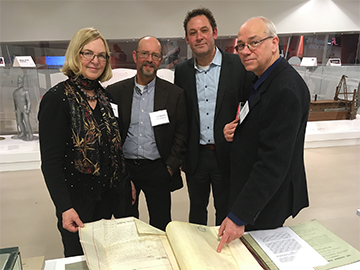 At the RCI Science event are Sharon Lefroy, descendent of the scientist; Wayne Reeves, Chief Curator of Museums & Heritage Services; David O’Hara, Site Manager of Fort York NHS; and Andrew Stewart, Chair of the Fort York Foundation. Sharon and Wayne will be writing about Captain Lefroy and his portrait in the July issue of the F&D. Photo: Robert BellIt’s already spring and the staff here at the fort is hard at work planning a full slate of warm-weather programs and events. But we’ve also had some memorable occasions this winter.

On Tuesday, February 5, the Royal Canadian Institute for Science held a private reception in the Fort York Visitor Centre. The subject was the globe-trotting life of Captain J.H. Lefroy, RCI Science’s fourth president and the manager of Upper Canada’s first major scientific experiment. The first installation of his Magnetic Observatory – later moved to the University of Toronto – was here at Fort York.

The highlight of the evening was the unveiling of a portrait (by George Berthon) of Captain Lefroy, which the institute has given to the City. The event also included presentation of the institute’s annual William Edmond Logan Award (for popular scientific writing) and an opportunity to mark the 140th anniversary of Standard Time, an innovation brought to the world by Canadian engineer Sir Sandford Fleming.

On the Family Day weekend we partnered with The Empress Walk and hosted its Art ‘n’ Soul panel discussion, with workshops, and a presentation by Giselle Wilson, founder of The Empress Walk. On Family Day itself, all the City of Toronto museums combined to bring a full day of free programming to Fort York. Some 1,500 people were here, including Mayor John Tory, who dropped by in the afternoon to see The Bentway at Fort York and all the kid-friendly happenings in the Visitor Centre.

On February 23, the second annual Hungry for Comfort: Surviving a Canadian Winter was a big success. Our spotlight this year was on the foodways of Black communities across the country, with speakers, demonstrations, workshops and tastings. The day was presented in partnership with the Ontario Black History Society and the Culinary Historians of Canada. More than 100 people enjoyed the catered Caribbean lunch (there’s a full report on page 14) and there were door prizes from publishers like Harper Collins. We were also grateful for the participation of Redpath Sugar, Bernardin, Mars, and the Ontario Apple Growers. I’d like to thank all the staff, volunteers and partners involved – particularly the Ontario Black History Society – for putting such a tasty event together.

Christophe Jivrag, Exhibit Coordinator from Collections & Conservation, this winter spearheaded the replacement of all the panels that form the Soldier’s Trade exhibit in the Centre Blockhouse. Many thanks to Christophe and the team for so carefully refreshing a big part of the story we’re telling here at Fort York.

A significant amount of construction is already underway on site this spring. Gordon Lok, Senior Project Coordinator from our Capital Assets team, has skillfully overseen the replacement of the roof on the North Soldiers’ Barracks and the Blue Barracks. This work was partly funded by a grant from the Parks Canada Cost Sharing Program for heritage places.

Working with our colleagues in the Parks, Forestry & Recreation Division, the multi-purpose trail along the north side of the fort has been finished, along with a subtle new fence beside it. The opening of this trail that more-or-less follows the course of Garrison Creek is contingent upon the completion of Lower Garrison Creek Park (also part of Fort York NHS) on the east side of Bathurst Street (but see page 9).

Garrison Crossing is expected to open in late May or early June. This will really improve connections for cyclists and pedestrians in the area. Another new piece of the bicycle network will be a trail south-west to the bike lanes on Strachan Avenue. From there, it’s south to the waterfront trail or north to the gates of Trinity Bellwood. That trail is being built beside Garrison Road to the west of the Armoury and is expected to be ready in June. 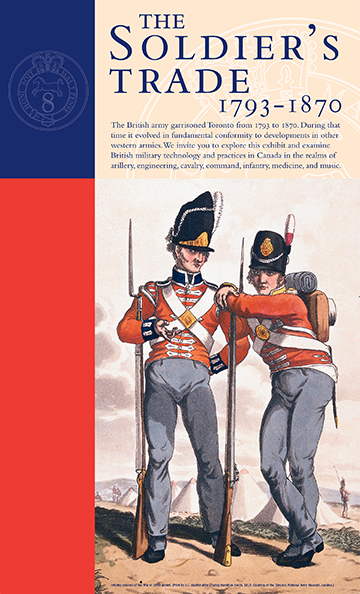 Display panels in the No.2 (Centre) Blockhouse have been refreshed.A sure sign of spring here at Fort York is always the story of the late-April arrival of the United States Navy, proudly carrying an entire brigade of soldiers intent upon seizing the capital of Upper Canada (they succeeded: check page 10). We’ll be running two different tours of the battlefield – one following the fighting all the way back from the beach (on Saturday the 27th) and a shorter one on Sunday that looks at the battlefield from Garrison Common. Led by our own experts Richard Haynes and Ewan Wardle, the tours offer a fascinating way to imagine the nearby waterfront as it was 200 years ago.

Everyone who loves a fine craft beer has a real opportunity on the Victoria Day weekend. After an afternoon in the old fort’s ambience, absorbing our new displays, you’ll be able to retire to Garrison Common and the spring session of Toronto’s Festival of Beer. It’s only on Saturday and Sunday, when the fort is open as usual. On the holiday Monday we’ll have a complete program going – including the historic kitchen – and there will be lots for kids to do.

Admission is free to the fort and the Visitor Centre again during the Doors Open weekend, the last one in May. Saturday here is Artillery Day, a chance to compare the technology of 1812, the 20th century and the present day. We’re expecting to have examples of artillery now in service with the Canadian Army. (And speaking of the army, our planners are also looking farther ahead – to the 75th anniversary of the end of the Second World War. Watch for events to be starting in September, including those focused on the wartime industry that surrounded us here on the waterfront.)

The climax of the season at Fort York is the Indigenous Arts Festival, more diverse than ever and almost a week in duration. We’re working with the Mississaugas of the Credit, Na Me Res, The Bentway, The Friends of Fort York and others to assemble an amazing program of music, dance, learning, food and the visual arts, ancient and modern. Watch our Twitter and Facebook accounts for detail as the festival approaches.